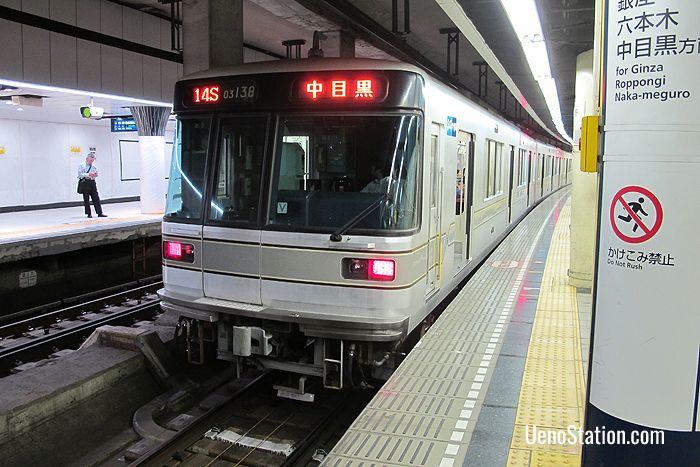 A train bound for Naka-Meguro Station at Ueno Subway Station

The Hibiya Line connects some of Tokyo’s most popular districts for shopping, dining, nightlife and other cultural pursuits. These include Nakameguro, Ebisu, Roppongi, Ginza and Akihabara.

Within the Tokyo Metro subway system the Hibiya Line is color-coded gray. There are 21 stations on this line.

In addition to these stations a new station is scheduled to open between Kamiyacho and Kasumigaseki in time for the 2020 Tokyo Olympics. 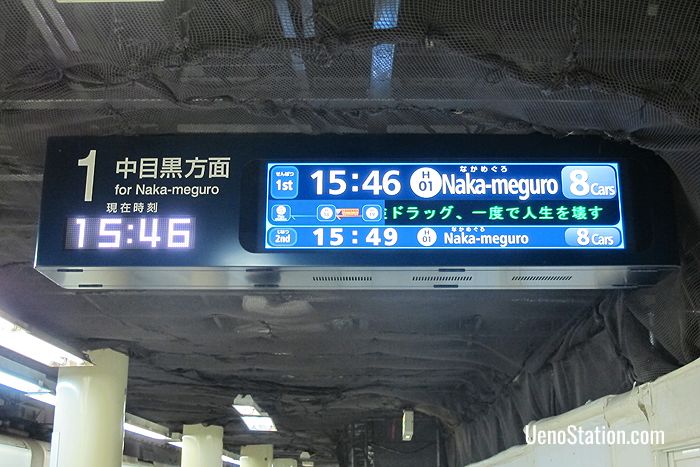 At Tokyo Metro’s Ueno Subway Station trains departing from Platform 1 on the Hibiya Line are bound for Ginza, Roppongi and Naka-Meguro 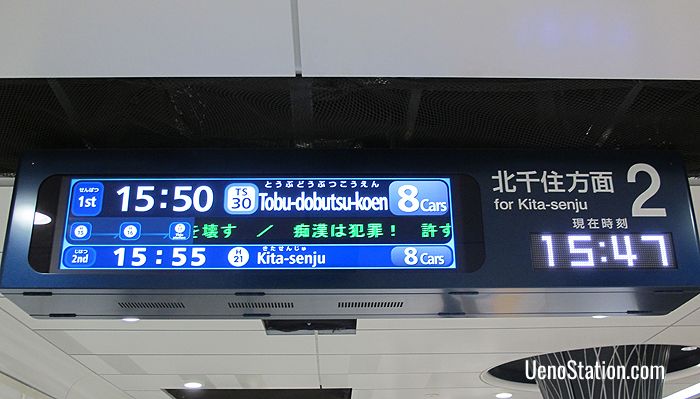 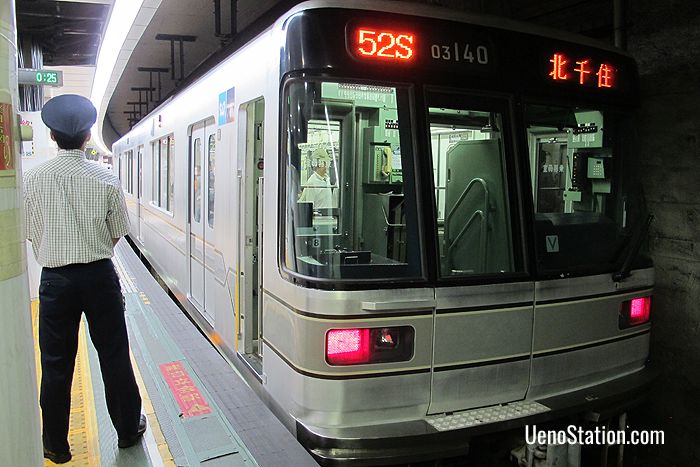 A train bound for Kita-Senju at Ueno Subway Station

The key destinations on the Hibiya Line are listed below with their transfer points. Example train fares and journey times are given from Ueno Station.

Nakameguro is a pleasant residential neighborhood with a rich assortment of cafes, restaurants, bookshops, and fashion boutiques. There is also a good selection of galleries and museums within walking distance of the station.

Transfer at Naka-Meguro Station to the Tokyu Toyoko Line.

Ebisu is a popular area with a great variety of restaurants, cafes, and bars.

Hiroo is an upmarket residential area which is especially popular with expatriate professional workers in Tokyo. There are a number of foreign embassies in this district and the area around Hiroo Station has a lot of cafes and restaurants.

Roppongi is a lively international district with large upmarket commercial developments such as Roppongi Hills and Tokyo Midtown. Roppongi is also famous for its nightlife and has a large number of bars, pubs, restaurants, and nightclubs.

Transfer at Roppongi Station to the Toei Oedo Line.

There are several attractions in the area around Kamiyacho Station and one very famous hotel.

Exit here for Hibiya Park. This large public park was first opened in 1903, and includes lawns, trees, flowerbeds and fountains. Also on the grounds are two open air music halls, a museum and library, a public hall, restaurants, and tennis courts. There are also a number of theaters in the Hibiya district. Nissay Theatre is a more conventional establishment that stages productions of kabuki, opera, musicals, and puppet shows for children. The Takarazuka Theatre stages all female-cast productions of colorful musical melodramas. The Imperial Hotel is a legendary luxury hotel which was first established in 1890 and is located just 7 minutes’ walk from Hibiya Station.

Transfer at Higashi-Ginza Station to the Toei Asakusa Line.

Tsukiji’s famous wholesale fish and seafood market closed on October 6th 2018 and its operations were relocated to Toyosu. However, Tsukiji’s outer retail market remains open and here you can still find stores selling kitchen utensils, restaurant supplies, seafood, groceries, and a lot of sushi restaurants. Also nearby is Tsukiji Honganji Temple, a grand structure built in the style of Southern Asian temples between 1931 and 1934. Though this building is modern, a temple has stood here since 1617.

There are a lot of traditional shops and restaurants in the Ningyocho area, particularly on the old shopping streets of Ningyocho-Dori and Amazake-Yokocho. Many shops sell sweet ningyo-yaki cakes – a traditional snack in this area. Look out for the two mechanical clock towers on Ningyocho-Dori. As the clocks chime the hour, little dolls shaped like firefighters and rakugo storytellers appear and put on a free show. Check the official Ningyocho website for local recommendations.

Transfer here to the Toei Asakusa Line and at nearby Suitengumae Station to the Tokyo Metro Hanzomon Line.

The Akihabara district is a famous commercial district with many wholesale stores selling cheap electronic and computer goods. Akihabara is also famous as a center of otaku culture with many shops selling manga comics, games, toys, cosplay costumes, and anime-related goods.

Ueno’s main attractions are the large number museums in the grounds of Ueno Park, the pandas at Ueno Zoo, and the bargain stores of Ameya-Yokocho shopping street.

The Ichiyo Higuchi Memorial Museum is a 7 minute walk from Minowa Station. Ichiyo Higuchi was a talented short story writer of the 19th century whose face is depicted on the 5,000 yen note. The museum displays various artifacts from her life and is built on the site of her former home. The museum is closed on Mondays or on the following Tuesday if Monday is a national holiday.

Transfer at nearby Minowabashi Station to the Toden Arakawa Tram Line.

Kita-Senju is a busy commercial district dominated by two large department stores: Lumine and Marui. In the shopping arcades around the station you can find many cheap restaurants and bars.

Full adult fares are charged for anyone aged 12 or older. Children aged between 6 – 11 are charged half the adult fare. Up to two toddlers (aged from 1 – 6) can travel for free if they are accompanied by an adult, however a third toddler will be charged a child’s fare. Infants under 1 year of aged are not charged.

Transfer tickets offer cheaper fares if you need to transfer between the Tokyo Metro and Toei Subway systems. These can be bought from any Tokyo Metro station ticket vending machine.

Prepaid IC cards such as PASMO, Suica and other regional IC cards can be used on Tokyo Metro instead of tickets. IC cards are economical, because the fares are cheaper than for regular tickets. IC cards also speed up transfers between different railway systems because you don’t need to stop in order to buy tickets.

The Tokyo Metro 24-hour Ticket gives unlimited rides on Tokyo Metro for 24 hours after its first use. It costs 600 yen for adults and 300 yen for children and can be bought from ticket machines at any Tokyo Metro station.

The Tokyo Subway Ticket is only available for overseas visitors on a tourist visa. This ticket gives unlimited travel on both the Tokyo Metro and Toei Subway. It can be purchased at Haneda Airport, Narita Airport, travel agencies such as JTB, HIS, Kinki Nippon Tourist and Nippon Travel Agency, several hotels in Tokyo and some Big Camera stores.

You will need to show your passport to purchase this ticket. This ticket can also be bought in combination with various rail or limousine bus tickets from either Haneda Airport or Narita Airport. For complete details of how and where to buy this ticket, please visit the Tokyo Metro website.

The Tokyo Combination Ticket gives one day’s unlimited travel on Tokyo Metro Subway lines, JR lines (in the 23 wards of Tokyo) and the complete Toei transportation network (Toei Subway, Toei Bus, Toei Streetcar Arakawa Line, and Nippori-Toneri Liner). The ticket costs 1,590 yen for adults and 800 yen for children. It is available from automatic ticket machines at each station.

Chika Toku is a special discount service available for holders of Tokyo Metro and Toei one day tickets. Simply showing your one day pass entitles you to discount deals at 400 different shops, restaurants, museums, and other facilities around Tokyo. For full details visit the official Chika Toku website.

Free Wi-Fi is available at Tokyo Metro railway stations. For details of how to access this service please visit the Tokyo Metro website.

There is also an English language Tokyo Metro route search page where you can get information on fares, journey times, and transfers.