The Tokiwa is a limited express service operated by JR East that provides a fast link between central Tokyo and destinations in Ibaraki Prefecture. 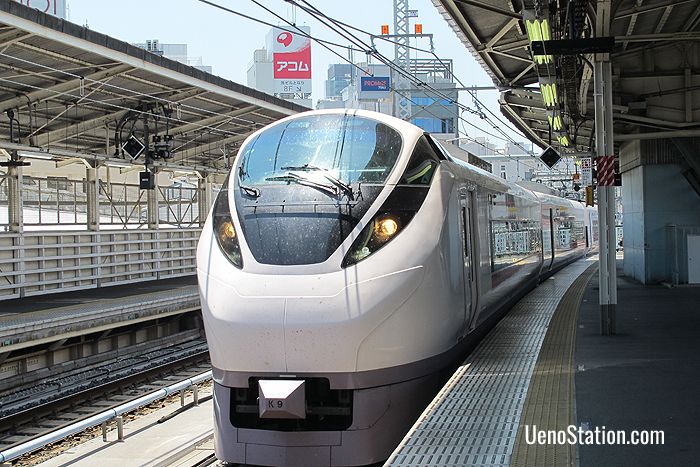 Between Shinagawa and Ueno, the Tokiwa runs along JR East’s Ueno-Tokyo Line, and beyond Ueno it runs along the JR Joban Line. The Tokiwa runs a similar course to the Limited Express Hitachi, which follows the same route all the way to Iwaki Station in Fukushima Prefecture. However, unlike the Hitachi, the northern terminus for most Tokiwa services is not Iwaki Station, but earlier stations in Ibaraki Prefecture. There is only one return Tokiwa service each day between Shinagawa and Iwaki.

At JR Ueno Station the Tokiwa usually departs from platforms 8, 9, 16, or 17. Because this is a JR service it is fully covered by the Japan Rail Pass.

The Tokiwa serves the following stations. Stations in parenthesis () are not served by all Tokiwa services.

There is only one return Tokiwa service to and from Iwaki Station each day. Most Tokiwa services have Katsuta Station as their northern terminus. Some services begin or end at Takahagi Station, and a small number start or finish at Tsuchiura Station.

The key destinations with their locations of interest and transfer points are listed below. Example travel times and fares (including limited express surcharges) are given from JR Ueno Station. 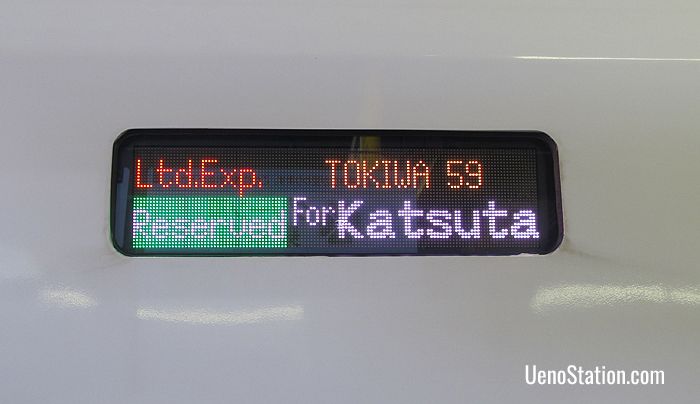 A carriage banner for the Limited Express Tokiwa

Shinagawa is a major transportation hub and a busy commercial center which has a large number of museums and one very famous temple. A 15 minute walk from the station is the graveyard of Sengakuji Temple which is famous for holding the tombs of the legendary “47 Ronin”. The story of these “masterless samurai” is a popular topic for kabuki drama, bunraku puppet plays, and movies. Museums around Shinagawa Station include the Nikon Museum, the Hara Museum of contemporary art, the Jade Ore Museum (Hisuigensekikan), and the Hatakeyama Memorial Museum of Fine Art.

Transfer at Shinagawa Station to the JR Yamanote Line, the JR Yokosuka Line, the JR Tokaido Line, the Tokaido Shinkansen, and the Keikyu Main Line.

Ushiku’s most famous attraction is the Ushiku Daibutsu: the world’s largest statue of the Buddha, which stands 120 meters tall. Visitors can go inside the statue and take an elevator up to the observation deck. Chateau Kamiya (also called Ushiku Chateau) is a historic wine chateau which was built in 1901. In addition to the elegant Meiji era buildings and gardens the chateau has two restaurants and a barbecue garden serving both fine wines and craft beers.

Tsuchiura Station is a 15 minute walk from the reconstructed Tsuchiura Castle in Kijo Park. The nearby Tsuchiura City Museum gives a good introduction to Tsuchiura’s history as an Edo era castle town.

Mito is best known for the Kairakuen Garden which is considered to be one of the finest landscape gardens in Japan. The garden has around 3,000 plum trees, which makes it a popular destination in February and March during the plum blossom festival. Mito’s other locations of interest are the historical buildings of the Kodokan school, Art Tower Mito, Ibaraki Prefectural Museum of History, Mito Municipal Botanical Park, and the Tokugawa Art Museum.

Transfer at Mito Station to the JR Suigun Line, and the Kashima Rinkai Railway Oarai-Kashima Line.

Passengers who wish to access the beaches at Hiraiso and Ajigaura should transfer here to the Hitachinaka Seaside Railway Minato Line. Ajigaura Station is also the closest station to Hitachi Seaside Park.

Most Tokiwa services terminate at this station.

Izumi Station is one of three stops in Iwaki City. Passengers should exit here if they wish to visit the seafood “theme park” Iwaki Lalamew. Lalamew has a large seafood market, sea view restaurants, shops, a kids play zone, and a seafood barbecue center. It is also the access point for cruises around Onohama Bay. From Izumi Station a taxi will take 15 minutes to reach Iwaki Lalamew.

Passengers should also exit here if they wish to visit Misaki Park and the Iwaki Marine Tower. A taxi to the tower will take around 18 minutes and there are also bus services that take around 25 minutes.

Passengers who wish to visit the Shiramizu Amidado Temple and its famous Pure Land garden should transfer at Yumoto Station to a local Joban Line service for Uchigo Station which is one stop to the north. From Uchigo Station the temple is a 30 minute walk.

Iwaki is the largest city in Fukushima Prefecture. Located on the Pacific coastline it is famous for its warm climate and its seafood. Close to Iwaki Station is Iwaki City Art Museum which exhibits works by Warhol, Matisse and Picasso. One of Iwaki’s most famous tourist attractions is the Shioyazaki Lighhouse. This working lighthouse and museum overlooks the Pacific Ocean and offers spectacular views of the coastline. The lighthouse can be reached by bus from Iwaki Station in 15 minutes.
Transfer here to the JR Banetsu East Line. Passengers who wish to travel further north along the Joban Line should also transfer here. 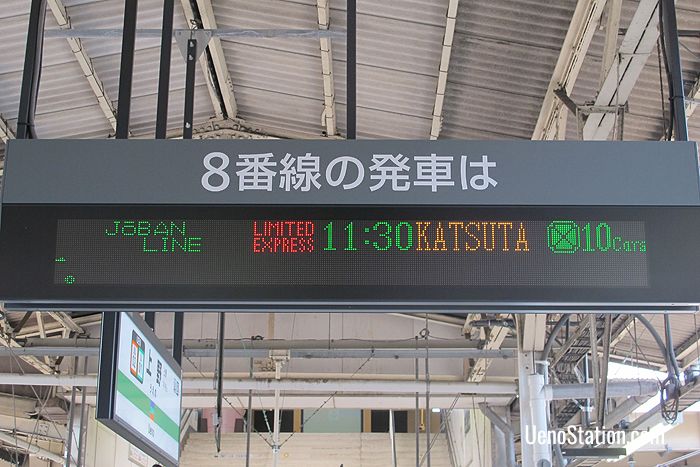 As an alternative to the Japan Rail Pass, JR East also have a discount pass for the Tohoku area of northern Honshu. This special 5 day pass for overseas visitors offers unlimited use of JR East’s local trains, shinkansen, and limited express services within the designated area and also some non-JR trains in the Izu and Nikko areas. The pass is great if you want to visit areas like Aomori, Akita, Sendai and Nikko. For prices and more details check the official JR East Pass webpage.

To plan your journey on the JR East network we recommend English language route finders like the Japan Transit Planner or Hyperdia. JR East also has complete timetables for all the Tokiwa and Hitachi services running north from Shinagawa and Ueno, and south towards Ueno and Shinagawa.