The Kusatsu is a limited express service operated by JR East that runs between JR Ueno Station in Tokyo and Naganohara-Kusatsuguchi Station in Gunma Prefecture. This service provides passengers with a quick link between central Tokyo and the three most popular hot spring resorts in Gunma: Ikaho Onsen, Shima Onsen, and Kusatsu Onsen. 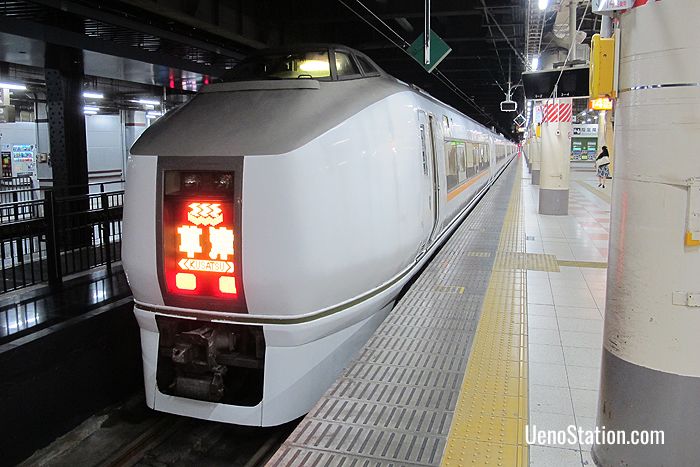 At JR Ueno Station the Kusatsu usually departs from platforms 14, 15, and 16. Because this is a JR service it is fully covered by the Japan Rail Pass.

The Kusatsu stops at the following stations.

The Kusatsu runs along four different rail lines: the Tohoku Main Line between Ueno and Omiya, the Takasaki Line between Omiya and Takasaki, the Joetsu Line between Takasaki and Shibukawa, and the Agatsuma Line between Shibukawa and Naganohara-Kusatsuguchi.

For information on destinations between Ueno and Takasaki, please see our JR Takasaki Line article. The Kusatsu’s other key destinations are listed below with their locations of interest and transfer points. Example travel times and fares (including limited express surcharges) are given from JR Ueno Station. 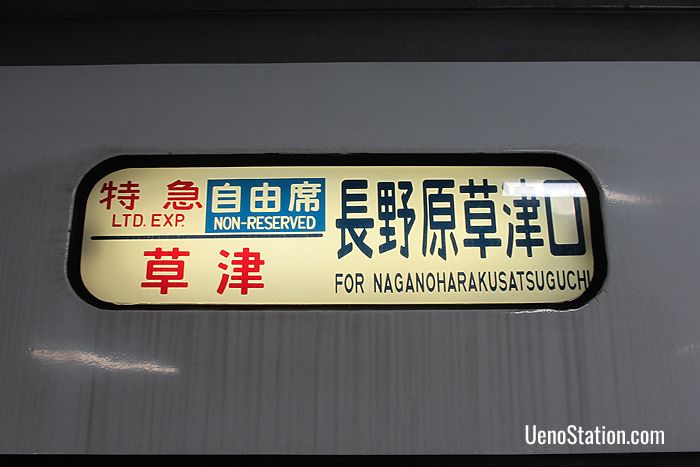 A carriage banner on the Limited Express Kusatsu

This is the closest station to the hot spring resort town of Ikaho Onsen. From the station passengers should take a bus for a 20 minute journey to the town of Ikaho. Ikaho is an ancient spa town on the slopes of Mount Haruna. Its natural thermal waters are said to be good for muscle pain, high blood pressure, fatigue, and general well-being. Ikaho’s top attractions are listed below. 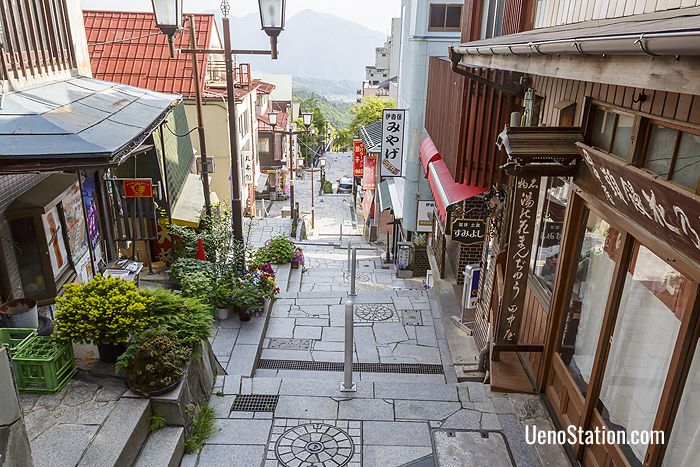 The stone stairway at Ikaho Onsen

Day trippers who do not wish to stay overnight can bathe in one of Ikaho’s many public bath houses. However, the best way to experience Ikaho is to enjoy a relaxing stay at one of the many hot spring spa resort hotels. Popular resort hotels in Ikaho are Oyado Tamaki, Fukuichi, Johinnosato Hibikino, Nagomigokoro-no-Yado Omori, and Chigira Jinsentei.

This is the closest station to the hot spring spa resort town of Shima Onsen. From the station passengers should take a 50 minute bus ride to the resort. However, a taxi will cover the same distance in 25 minutes. 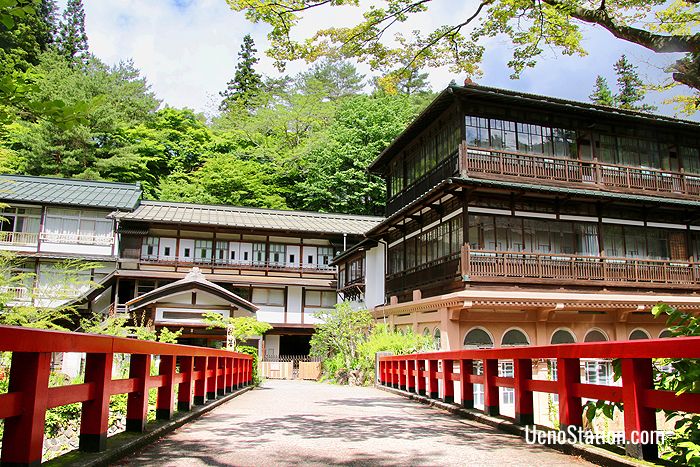 Shima Onsen is located in a green valley surrounded by mountains. This historic town has 40 separate hot spring sources providing healing waters to 36 ryokan inns and numerous public bath houses. “Shima” means “40,000” which represents the number of health problems the mineral waters are supposed to be able to heal.

Among the traditional souvenir shops, and retro games arcades, is the temple of Hinatami Yakushido. Dedicated to Yakushi Nyorai, the Buddha of Healing, the temple marks the spot where the first spring was found in 989. The temple hall with its thatched roof dates back to the Muromachi period (1336-1573), and the temple also has a free public foot bath. The Shima River runs through the valley and has many scenic spots, such as Kamigafuchi Gorge, several waterfalls, and Lake Okushima. Shima Onsen is said to be one of Japan’s oldest hot spring resorts and is a great location in which to unwind in a center of natural beauty.

Naganohara-Kusatsuguchi Station is the closest railway station to the hot spring spa town of Kusatsu Onsen. Passengers can take a JR Bus from the station to Kusatsu Onsen in 30 minutes. Because this bus is run by JR it is actually covered by the Japan Rail Pass. 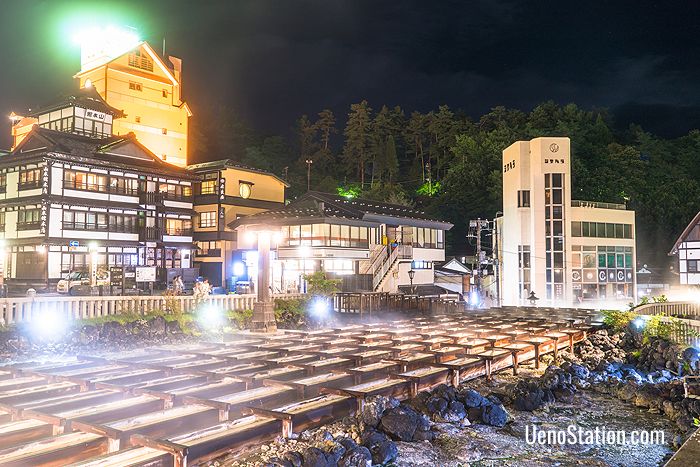 Kusatsu Onsen’s boast is that its mineral waters can heal everything except a broken heart. The spring water is heated naturally by the nearby active volcano Mount Kusatsu-Shirane, and is so hot that it needs to be cooled before it is used for bathing. In the center of town is the “Yubatake” which literally means “hot water field” and it is here the spring water is passed through a system of wooden channels until it is cool enough to use. Another local custom is the Yumomi dance, in which local people sing and stir the steaming waters with large wooden paddles until they are cool. This traditional folk performance can be seen at the Netsunoyu Bathhouse which is beside Yubatake.

Other attractions are the large open air bath in Sainokawara Park, the gift shops and antique arcades of Sainokawara Street, and Shirane Shrine. The shrine is dedicated to Yamato Takeru, a legendary hero of the 1st century, who is said to have discovered the hot springs at Kusatsu. 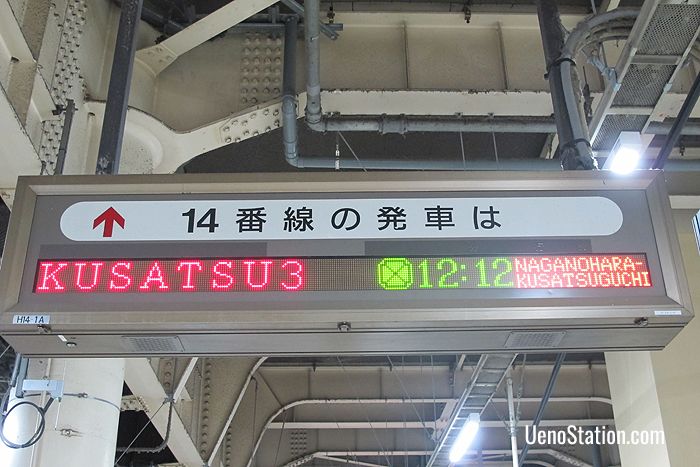 As the Kusatsu’s schedule is subject to change we recommend using the online English route finder Hyperdia to plan your trip. Full timetables from Ueno and from Naganohara-Kusatsuguchi can be found on the JR East website, but these are only available in Japanese.