The Akagi and Swallow Akagi are limited express commuter services that provide a fast and comfortable link between JR Ueno Station in Tokyo and destinations in Saitama and Gunma Prefectures. The Akagi is the name given to weekend and holiday services, and the Swallow Akagi is the name given to weekday services. Although the weekday and weekend services are almost the same, the Swallow Akagi makes two more stops than the Akagi. Traveling on a weekday is also cheaper. 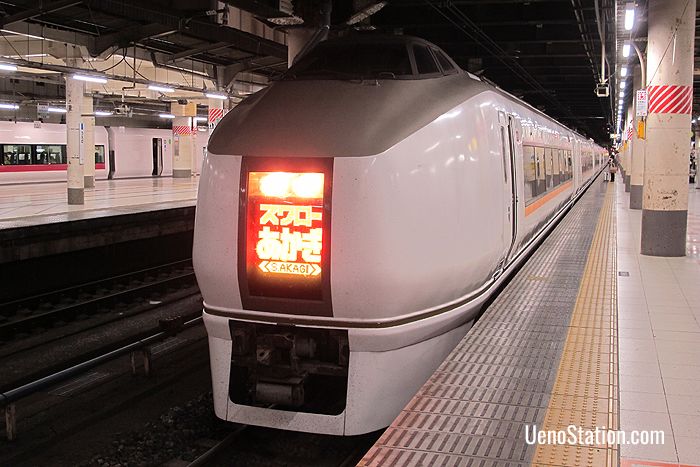 These two services are named after Mount Akagi, which is a famous mountain in Gunma Prefecture and “swallow” indicates the swift speed of the train. However, it is also a pun, because “swallow” sounds like the Japanese word suwarou which means “let’s sit”. At JR Ueno Station these services usually depart from platforms 14, 15 and 16. Because these limited express services are operated by JR East they are fully covered by the Japan Rail Pass.

Between Ueno and Omiya the Akagi and Swallow Akagi services run along the Tohoku Main Line, and between Omiya and Takasaki they run along the Takasaki Line. Most northbound services terminate at Honjo Station or Takasaki Station. However, a small number continue on the Joetsu Line to Shin-Maebashi Station and then on the Ryomo Line to Maebashi Station. The stations served are listed below. Note that the stations in parentheses () are served only by the Swallow Akagi and not by the weekend Akagi services.

The main destinations for these services are given below. For more detailed information about the stations on this route, please see our Takasaki Line article. Train fares (including limited express surcharges) and example travel times are given from JR Ueno Station. 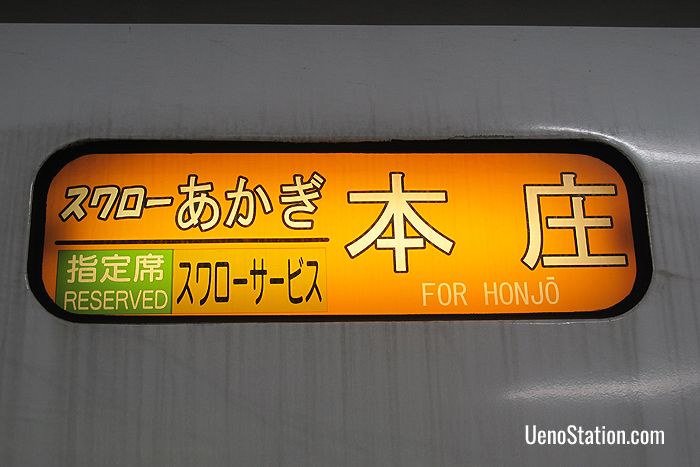 A carriage banner on the Swallow Akagi

Kumagaya City in Saitama Prefecture is known as one of the hottest cities in Japan. Coincidentally, the biggest annual event in Kumagaya is a summer festival named after the uchiwa, or handheld paper fans, that people use to keep cool. This paper fan festival, called Uchiwa Matsuri, is held every year from July 20th – 22nd and it is one of the biggest events in the Kanto region. During the festival 12 festival floats are paraded through the streets accompanied by the traditional music of flutes and drums.

The main tourist attraction in Kumagaya is Menuma Shodenzan Temple which was first established in the 12th century. The current buildings date from the 17th century and are covered in colorful and elaborate colorful carvings. One famous carving shows an eagle rescuing a monkey from a waterfall and is believed to be by the artist Hidari Jingoro. This is the same artist who carved the famous “three wise monkeys” on the Toshogu Shrine in Nikko.

Honjo City in Saitama Prefecture has a number of historic buildings. The Honjo City Museum of History and Folklore is located in a Meiji era Western style building dating from 1883 that was originally built as Honjo Police Station. The museum exhibits a rare collection of “smiling” haniwa, clay figurines dating from the Kofun period (3rd to 7th centuries). Kyoshinsha Mohan Sanshitsu is a massive wooden building dating from 1894 that was originally used to cultivate silkworms. Hanawa Hokiichi Kyutaku is the former home of Hanawa Hokiichi (1746 – 1821), a famous blind scholar who Helen Keller praised as a personal inspiration.The Edo era building with its thatched roof and garden is designated as a National Historic Site.

Takasaki is a big city in Gunma Prefecture with good transportation links, a number of sites of historical and cultural interest, and easy access to Gunma’s natural scenery. The top tourist attractions are listed below.

Some northbound Swallow Akagi and Akagi services terminate at Takasaki Station. Passengers who wish to continue on to Maebashi Station can transfer to the JR Joetsu Line. Takasaki Station is also served by JR East’s Agatsuma Line, Hachiko Line, and Ryomo Line; the Joetsu Shinkansen and Hokuriku Shinkansen; and the Joshin Electric Railway Line.

This station is served by the JR East’s Joetsu Line, Ryomo Line, and Agatsuma Line.

Maebashi is the capital city of Gunma Prefecture and a good point from which to access the natural scenery around nearby Mount Akagi. Mount Akagi is actually a series of peaks rather than a single mountain, and has breathtaking scenery in every season. Akagi Jinja Shrine is located at the foot of Mount Kurobi which is the highest peak in the Mount Akagi chain. The shrine overlooks Lake Onuma which is the largest crater lake in the area. There is a walkway around the lake which takes an hour to walk around. Hiking, boating, camping, and fishing are all popular activities in this area. The nearby marshes of Kakumanbuchi also have a well-made walkway over them from which visitors can view seasonal flowers.

To the south of Mount Akagi is the village of Akagi Onsen where there are a small number of ryokan, or traditional inns, with natural hot spring baths. Day trippers can bathe at these inns, but this is also a good place to stay before or after hiking through the mountain scenery. Two ryokan here which offer accommodation with hot spring bathing are Akagi Onsen Hotel and Akagi Onsen Onyado Sohonke.

On weekends and holidays there is a direct bus that runs from Maebashi Station to Mount Akagi Visitor Center. It takes about 1 hour. On weekdays passengers should take a bus from Maebashi Station to Fujimi Onsen, and then transfer to a bus bound for Mount Akagi Visitor Center. This more indirect route can take around 1 hour and 20 minutes depending on the wait between buses. However, probably the easiest way to explore this area is by rental car. Nippon Rent-A-Car provide a reliable service and have an office just 6 minutes’ walk from the station.

Maebashi Station is served by the Ryomo Line. Passengers can also transfer to the Jomo Line at Chuo-Maebashi Station, which is a 15 minute walk away. 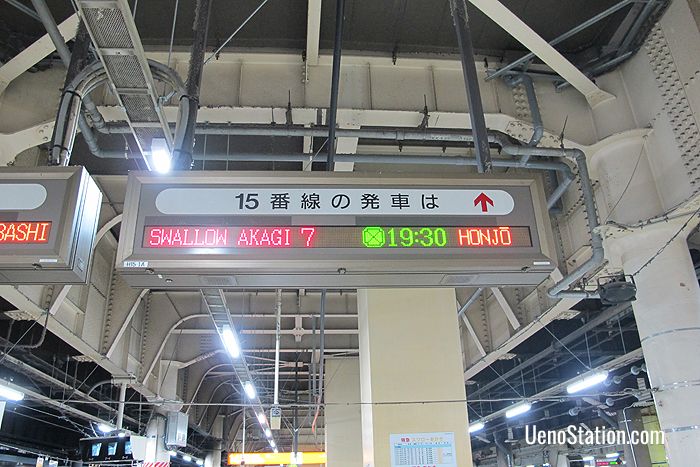 On weekends and holidays the Akagi runs two evening northbound services from JR Ueno Station, and two morning southbound services back to JR Ueno Station. In addition, the #10 service from Maebashi Station does not return to Ueno, but is diverted onto the Yamanote Line at Omiya and then continues on to Ikebukuro Station and Shinjuku Station.

To plan your journeys on the JR East network we recommend English language routefinders like Hyperdia and the Japan Transit Planner.