Yushima Tenmangu is an ancient Shinto Shrine located close to Ueno Park. The shrine is dedicated to Tenjin the Shinto god of learning and many students pray here for success in their studies and exams. On the shrine’s grounds are a famous plum grove and a large statue of a cow which is believed to have healing powers. 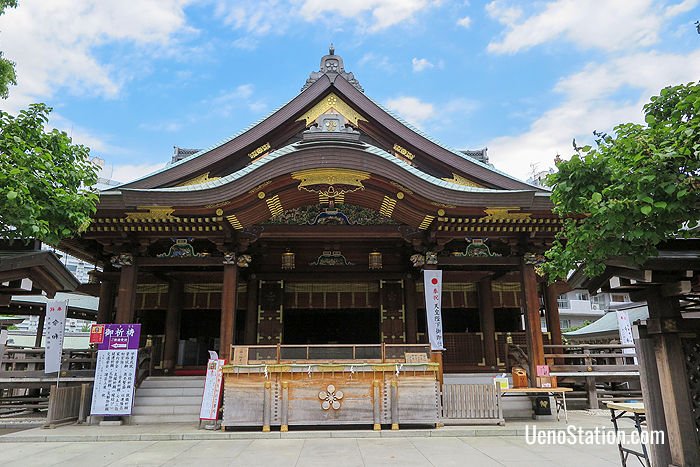 The Honden or Main Shrine Building of Yushima Tenmangu

Yushima Tenmangu, which is also called Yushima Tenjin, was first established in 458 and originally dedicated to a god of physical strength called Ame-no-Tajikarao. In 1355 the shrine was expanded and the god Tenjin was also enshrined here. Tenjin is the name given to a famous Heian era scholar, statesman, and poet called Sugawara Michizane (845 – 903). After his death he was raised to the status of a god and because he is so popular his shrines are very common throughout Japan.

Michizane was very fond of plum blossoms and wrote many poems about them. For this reason Tenjin shrines usually have a plum grove in his honor. Because the plum trees bloom at the same time as exam results are released this has strengthened Tenjin’s association with success in exams. The grove of plum trees at Yushima Tenmangu are particularly famous for their blossoms in February and March when an Ume Matsuri (or plum blossom festival) is held. 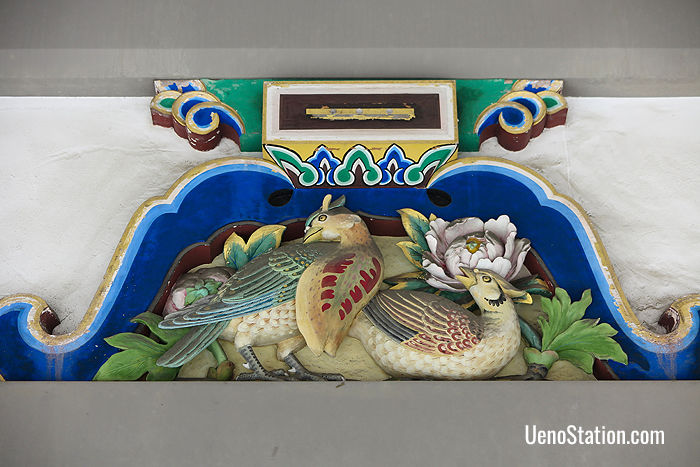 A detail of a roof carving at Yushima Tenmangu

The current buildings at Yushima Tenmangu were rebuilt in 1995 using cypress wood and closely following traditional Shinto architectural style. There are many colorful carvings on the eaves of the buildings. 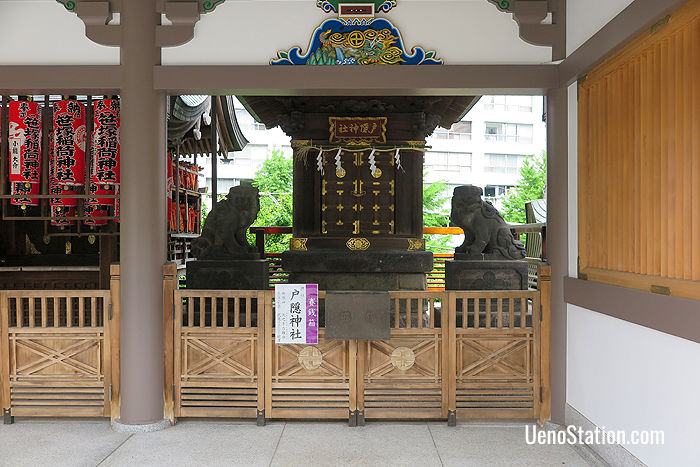 A shrine to Ame-no-Tajikarao, the god of physical strength

Behind the Honden there are two smaller shrines, one for Ame-no-Tajikarao, and one for Uka-no-Mitama who is the god of food and agriculture. 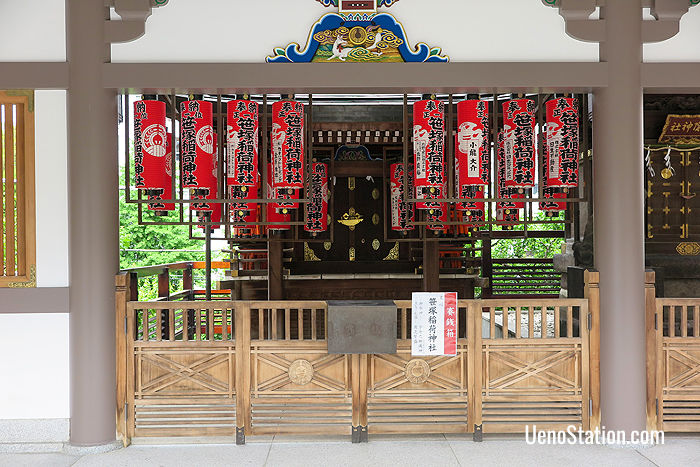 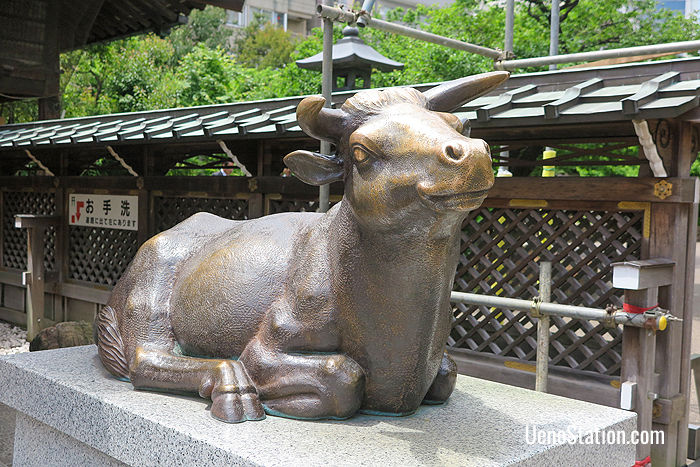 The nade-ushi or “patting cow”

Statues of cows are a common feature at Tenjin shrines. There is a story that when Michizane died his funeral carriage was pulled by an ox. At some point the ox stopped and refused to go any further, so the first Tenjin shrine was built at that location. 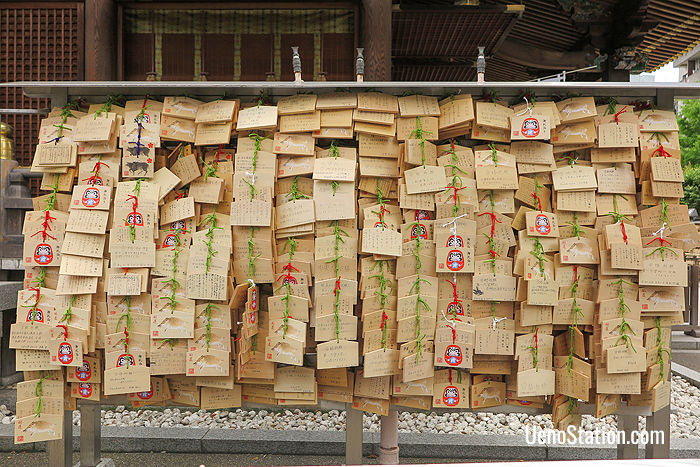 Students who visit the shrine write their prayers for success on ema, which are wooden prayer tablets and then hang them up for good luck. 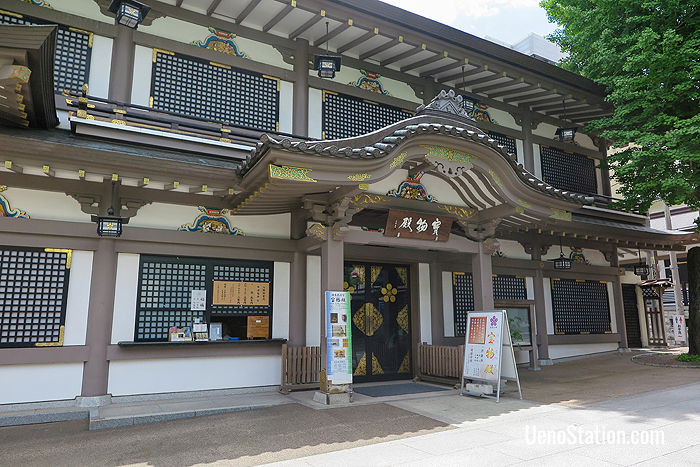 Yushima Tenjin Treasury is a small museum on the shrine grounds which has on display a rich array of artifacts and art objects such as hanging scrolls, Noh play masks, swords with ornate scabbards, ceremonial bows and arrows, and gorgeously decorated palanquins and portable shrines. There also many ancient manuscripts featuring images of Sugawara Michizane. Unfortunately, there is no English information with the items on display. 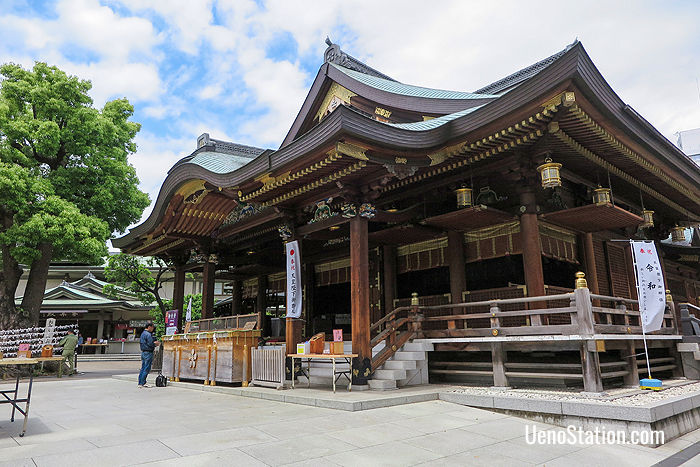 A side view of the Honden

There are several big festival occasions at Yushima Tenmangu when the shrine grounds will be lively with visitors and crowded with stalls selling a variety of snacks and drinks. The first is the New Year celebrations when people come to make their first visit to the shrine and pray for the coming year.

The Ume Matsuri follows in February and early March when over 300 plum trees of many different varieties bloom in varying shades of white, pink, and red. During this festival there are outdoor tea ceremonies, traditional music performances, and umeshu (plum wine) tasting events.

Tenjin Matsuri is the major festival at this shrine and is held on the 25th of May with taiko drum performances, kagura dances, and displays of ikebana and bonsai. Every two years (on even-numbered years) there is a parade of highly decorated portable shrines on the weekend following the 25th of May.

From early to late November the shrine also hosts a Chrysanthemum Festival. Over 2,000 chrysanthemums are displayed on the shrine grounds. Among the colorful displays are life-sized dolls of historical figures which are brightly clothed in flowers. 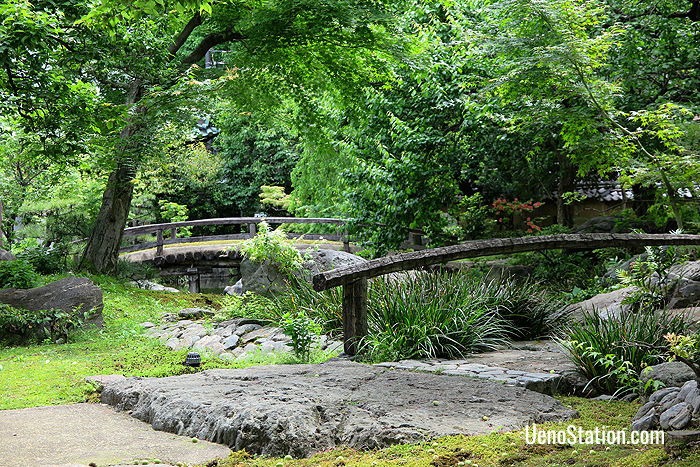 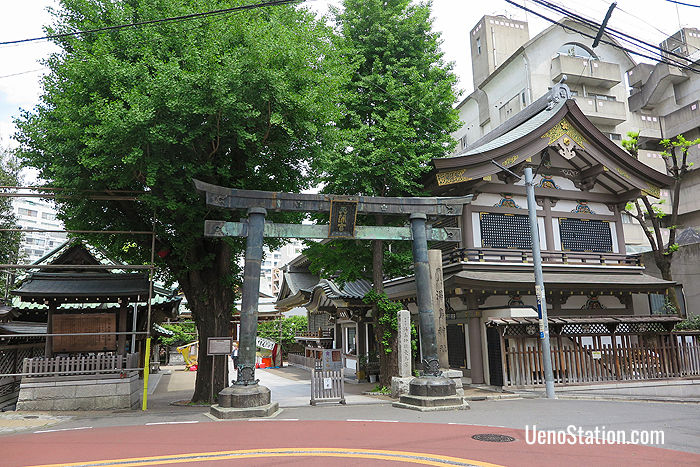 The main entrance. The copper gate dates from 1667