Ueno Zoo is the oldest zoo in Japan and one of Ueno’s biggest attractions. The zoo began as a collection of wild animals attached to the National Museum of Natural History and was first opened as a public zoo on March 20th 1882. Since those early days the zoo has expanded greatly and is now home to over 3,000 animals from 400 different species. However, the most famous animals at Ueno Zoo are its giant pandas. Ueno Zoo today is a modern establishment that is active in wildlife conservation efforts and tries to house the animals in enclosures that resemble their natural environment. 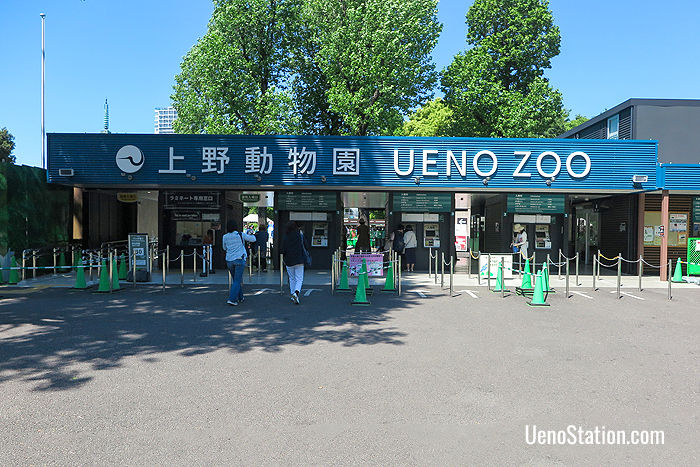 Ueno Zoo is BIG. You could easily spend 3 or 4 hours there and still not have viewed every animal on display. The zoo grounds are divided into an East Garden and West Garden which are linked by a monorail, although you can also walk between these gardens. Here is a short guide to the main areas of interest.

The big celebrities at Ueno Zoo are the giant pandas. The zoo has had pandas since the first pair were donated in 1972 as a gesture of friendship from China to Japan. The current pair of pandas are a male called Ri Ri, and a female called Shin Shin, which arrived at the zoo in 2011. Although giant pandas are well-known for being difficult to breed in captivity, Shin Shin gave birth to a female cub in 2017. Called Xiang Xiang, the cub is very popular with visitors to the zoo, but if you want to see her you should visit soon. Xiang Xiang is due to be returned to China at the end of December 2020. The pandas are kept in a special section just inside the Main Entrance in the zoo’s East Garden. Usually there is a long line of people waiting to see them. A line of people waiting to view the pandas

As you walk into the first section of the panda exhibit area, where Xiang Xiang is on display you are expected to keep moving and you are not supposed to stop very long to take photos.

Because the pandas are so popular, each visitor is only allowed one minute in the first section before moving to the next section. For this reason, if Xiang Xiang is facing the other way, then you might not be able to get a very good picture. You will still have a chance to see Xiang Xiang’s parents in the other sections though.

In addition to the pandas, there are many charismatic animals in the East Garden which are housed in their own special enclosures such as “Gorilla Woods” and the “Tiger Forest”. Here are some pictures. 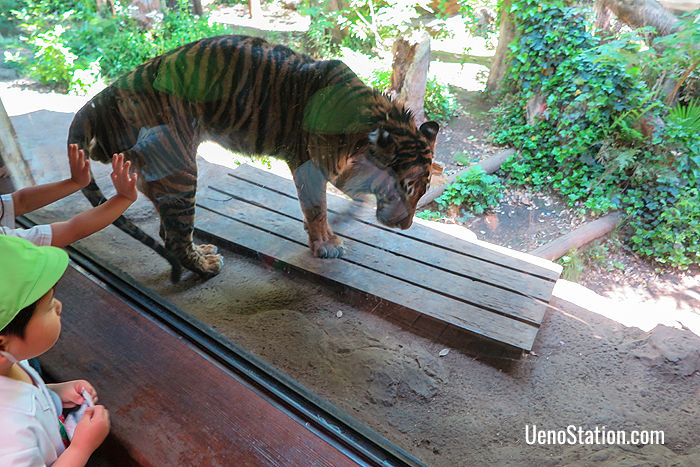 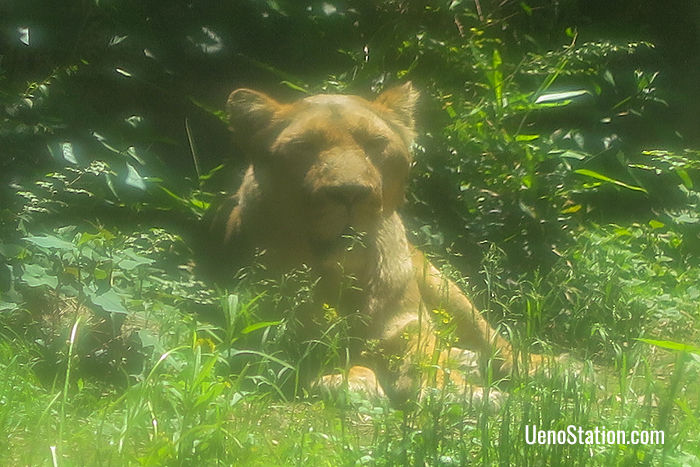 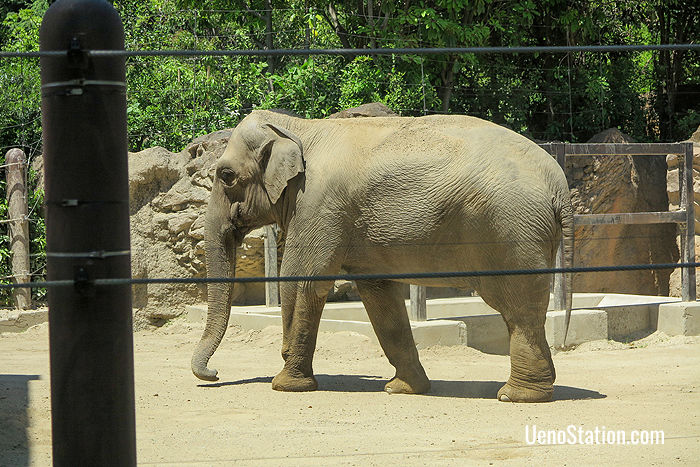 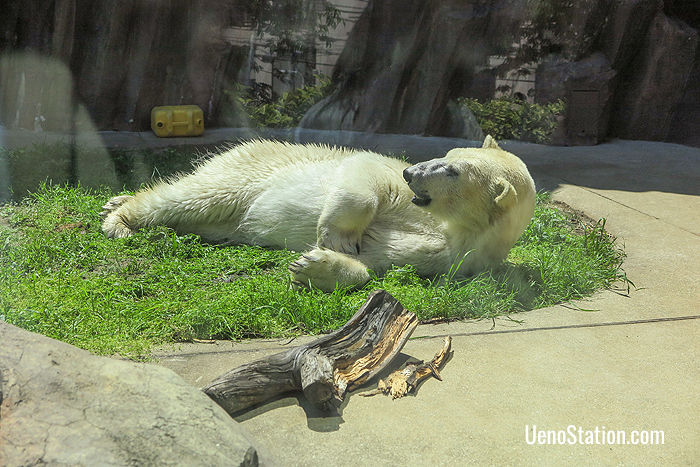 The East Garden also has a section devoted to native Japanese animals and birds, and some smaller creatures such as American prairie dogs. 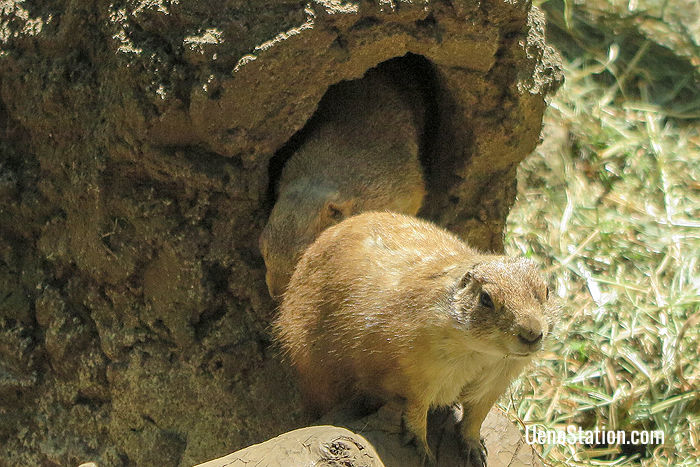 Prairie dogs emerging from a burrow

The West Garden has section devoted to African animals, a small mammal house, a Vivarium which houses rare reptiles and amphibians, and a children’s zoo which has domestic farm animals and a petting section with guinea pigs and rabbits. An Eastern Black Rhinoceros in the African Animals section 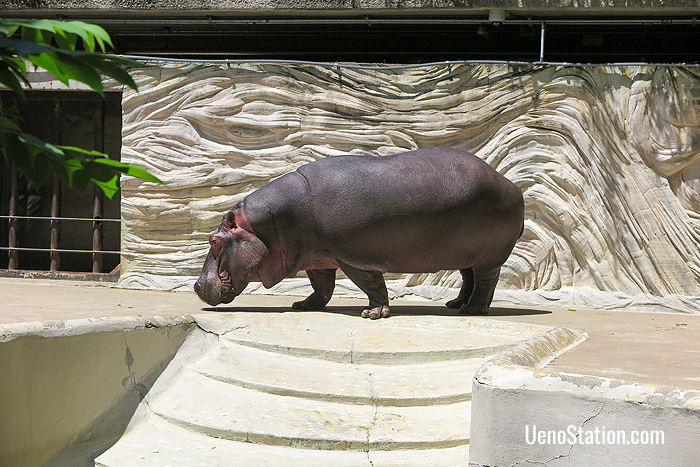 The Ueno Zoo has succeeded in breeding rare pygmy hippos 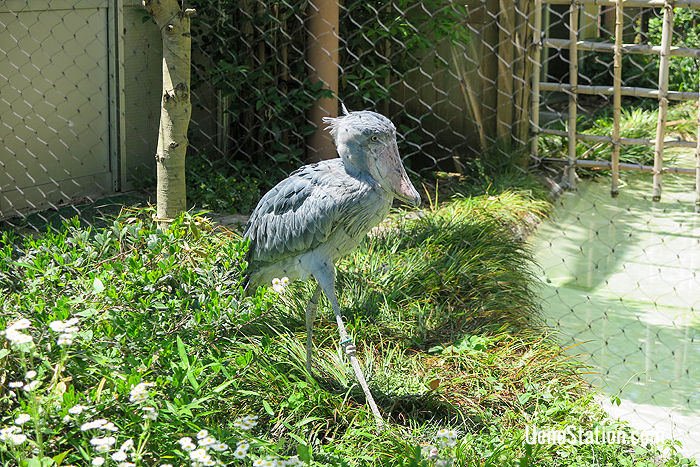 A Shoebill Stork native to Africa 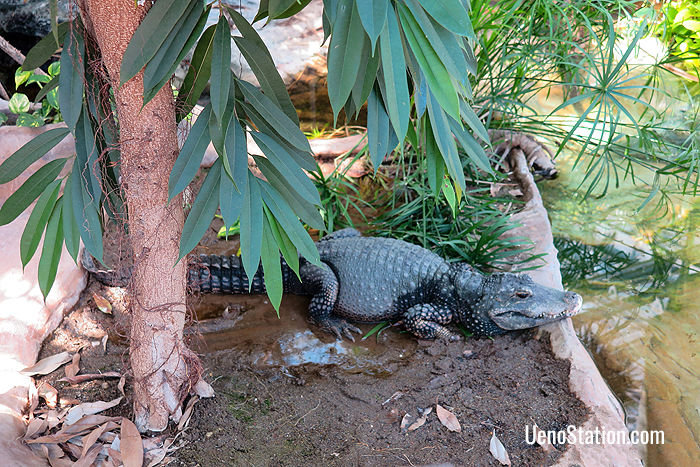 A West African Dwarf Crocodile in the Vivarium

Around the Shinobazu Pond are a number of enclosures holding lemurs and rare birds. 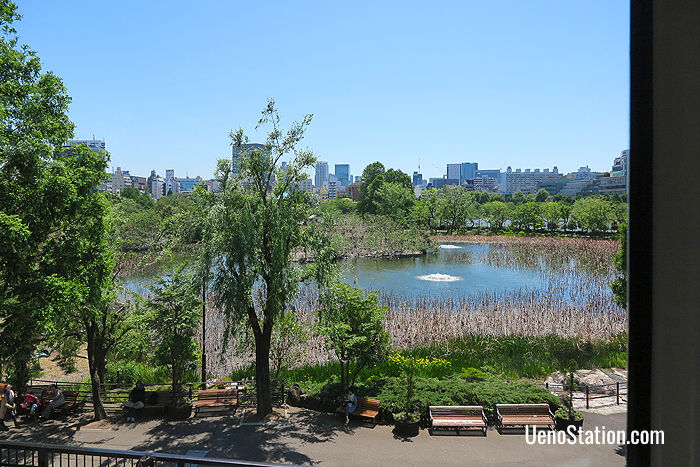 The Shinobazu Pond viewed from the monorail

The monorail at Ueno Zoo has been running since 1957 and was the first monorail in Japan. It links the eastern and western parts of the zoo. 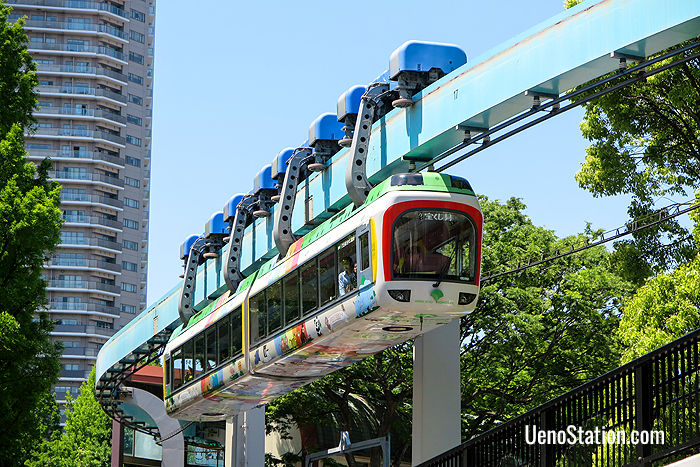 The monorail fare is 150 yen for adults and 80 yen for children aged 2 to 11. Regular trains run at 8 or 15 minutes and take about 90 seconds to complete the journey. 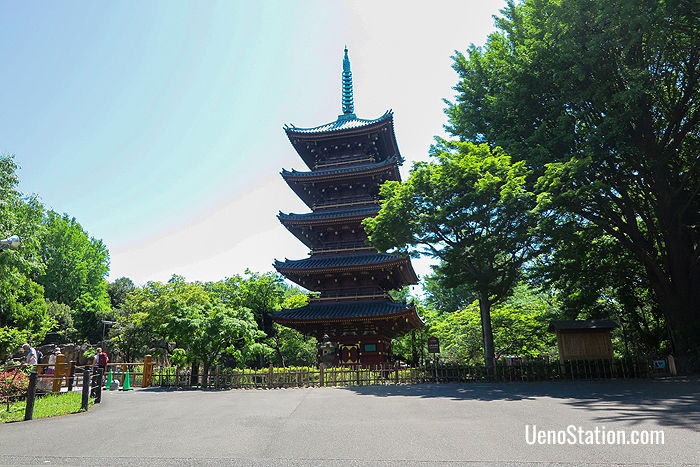 The Five-Storied Pagoda of Kaneiji Temple is located in the East Garden. This is an unusual structure for a modern zoo, and a reminder that the land now covered by the zoo, all of Ueno Park, and even the location of JR Ueno Station, was once part of a large temple complex. Kaneiji Temple was much reduced in size after the Battle of Ueno in 1868 and its grounds were confiscated by the government. This pagoda is a remnant of the old temple, and stands separately from modern Kaneiji Temple which now occupies a much smaller area to the north-west of the park. The pagoda was first built in 1631, and then rebuilt in 1639 after being destroyed by fire. Tokyo Metropolitan Government donated the pagoda to the zoo in 1958. 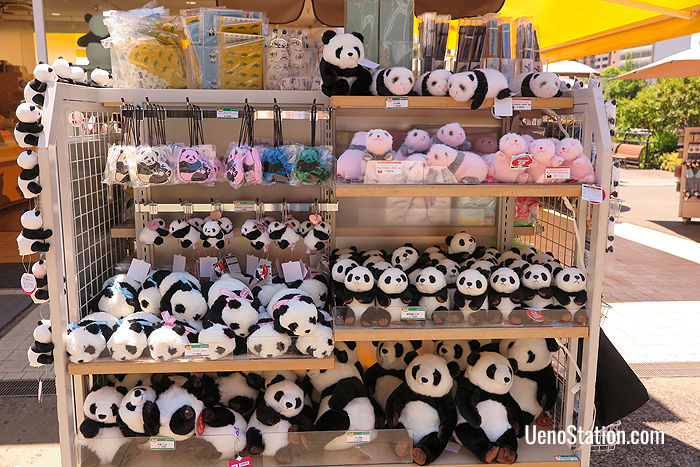 Café Chameleon in the West Garden has indoor seating and here you can get hot dogs, maple pancakes, fried chicken, fried noodles, ice creams, and hot or cold drinks. 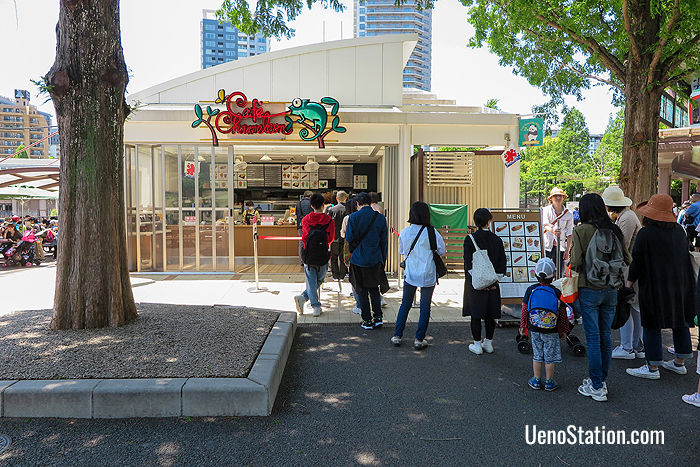 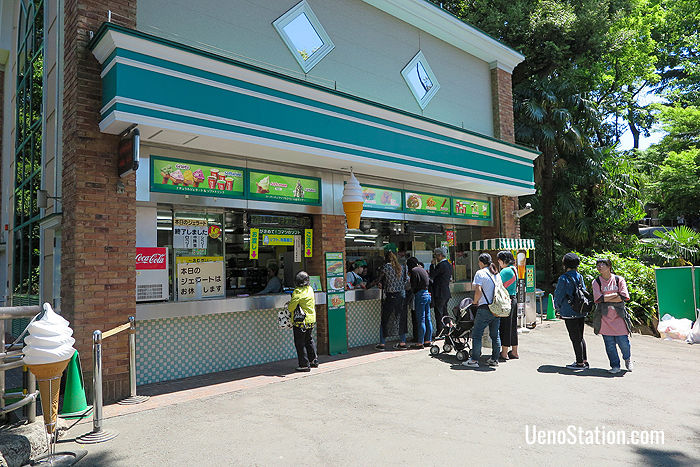 A fast food outlet in the East Garden

Baby strollers, coin-operated lockers, and wheelchairs are available near the zoo entrances.

Wheelchairs by the Main Entrance

There is also an Information Center near the Main Entrance and multilingual maps of the zoo grounds are freely available. 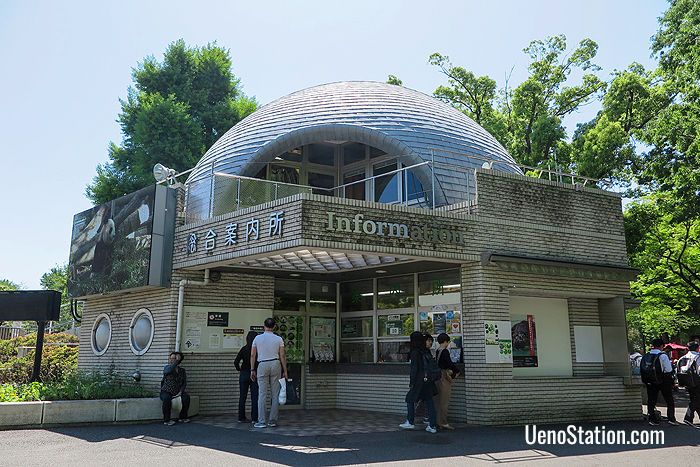 The Information Center at Ueno Zoo

For the well-being of the animals the zoo has the following rules:

Opening Hours: 9.30 – 17.00 (Last entry: 16.00)
Closed on Mondays (open if Monday is a national holiday and then closed the following Tuesday), and closed between December 29th and January 1st. 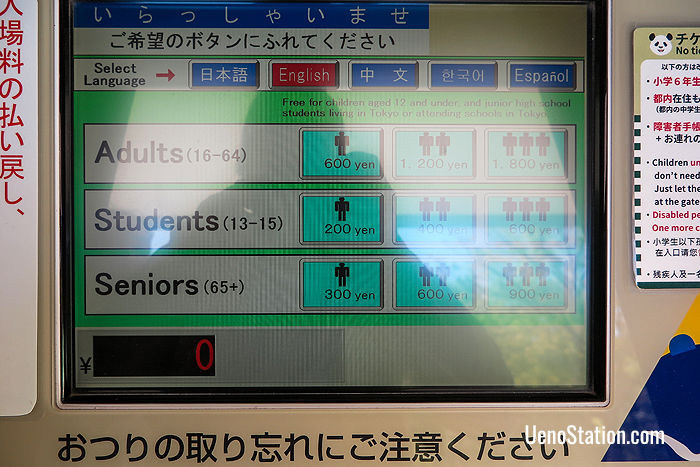 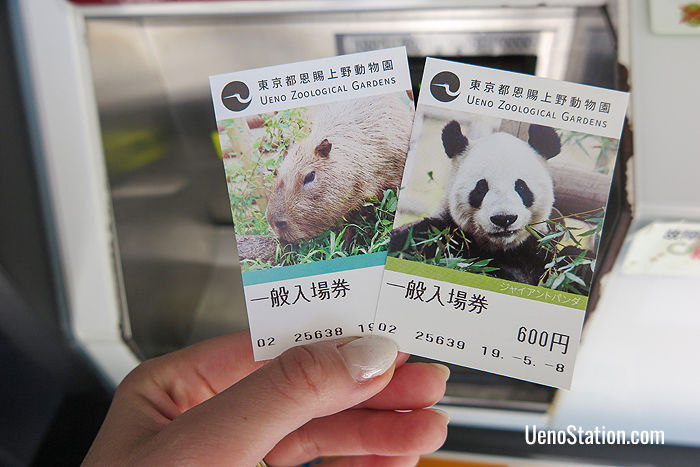 Two tickets for the Ueno Zoo!