Marishiten Tokudaiji is a Nichiren Buddhist temple in Ueno. The temple stands on raised ground above Ameyoko street market, and because its entrance is on a side street it is easily missed. Steps lead up to the temple from street level, and at the top you can enjoy a gentle breeze and a peaceful space away from the busy crowds below. This is not a big temple, but it is very colorful, and there are some interesting statues on the temple grounds. 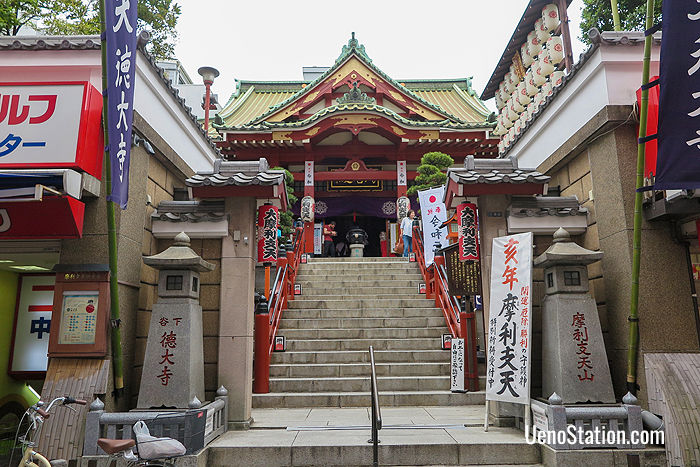 The entrance to the temple

Marishiten Tokudaiji is believed to be around 400 years old and is dedicated to a Buddhist guardian deity called Marishiten. This is a powerful goddess who protects against misfortune, invites good fortune, and bestows long life and happiness. 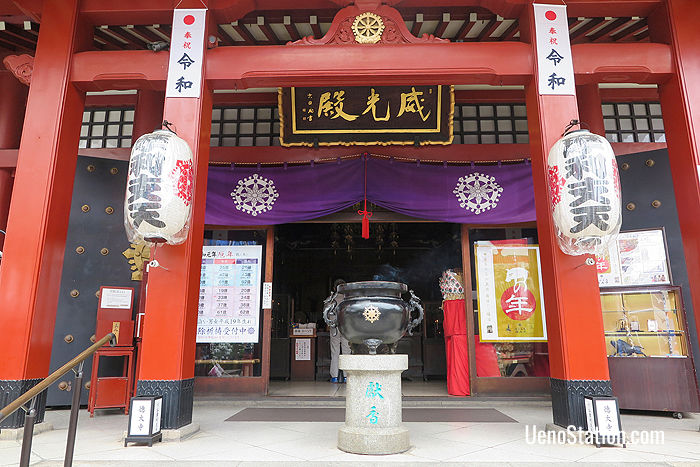 There is a statue of Marishiten enshrined in this temple that is believed to have been made by Shotoku Taishi (574 – 622), a legendary prince who helped introduce Buddhism to Japan. The statue was brought to this temple in 1708, but is considered too sacred to be put on public show. However, if you pick up a pamphlet at the temple you can see a drawing of the statue. The image depicts Marishiten standing on the back of a charging boar with a raised left hand, and a sword in her right hand.

The image of a charging boar is a symbol of courage, strength, and speed. Perhaps because of these qualities, Marishiten was a popular goddess for samurai in the Edo era, who believed she would give them strength and protect them in battle. Later she became a popular object of worship for the merchant classes, and for entertainers and performers who all believed she would bring them success in business and show business. 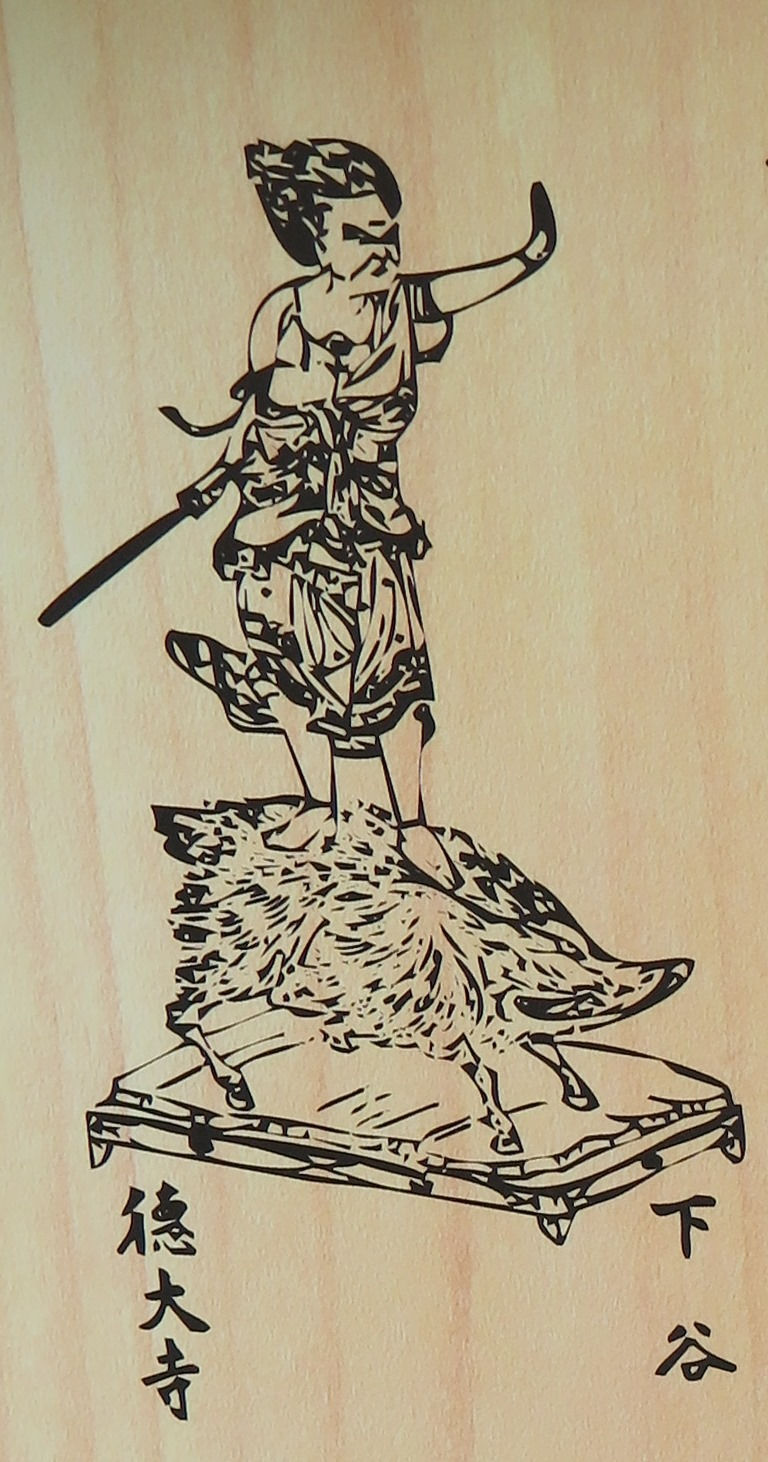 Although the temple building burned down in the fires that followed the Great Kanto Earthquake of 1923, and the firebombing of Tokyo in 1945, somehow the statue of Marishiten survived. For this reason people also pray to her for protection against disasters. The current temple building dates from 1964. 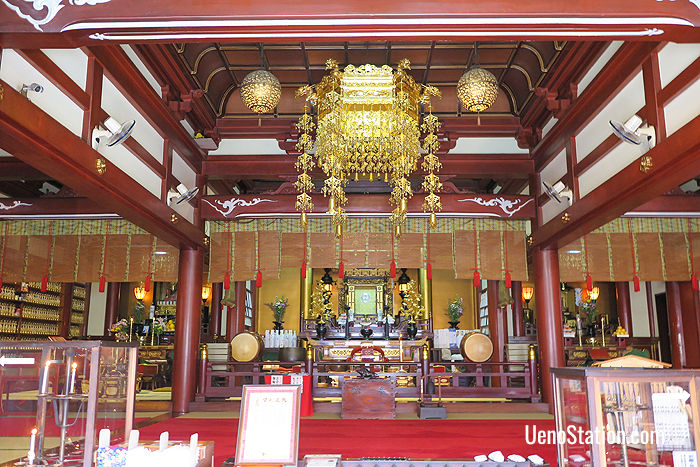 The main altar inside the temple

Although you cannot see the Marishiten statue, there are some other interesting statues on the temple grounds. 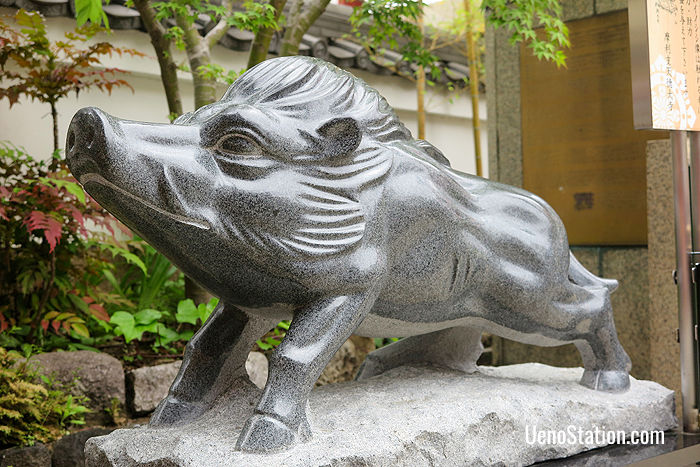 A statue of a wild boar

The wild boar is an animal of great strength that is closely associated with Marishiten. A sign next to this statue says that people who rub this statue will be given both spiritual strength and physical strength, and financial strength too! 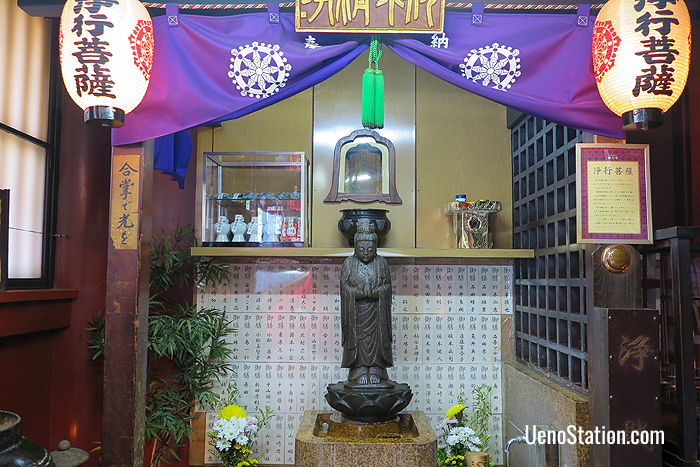 This statue of Jogyo Bosatsu is inside the temple

Jogyo Bosatsu, is a compassionate Buddhist saint whose name means “practice purity”. People pray to Jogyo Bosatsu for recovery from illness or injury. 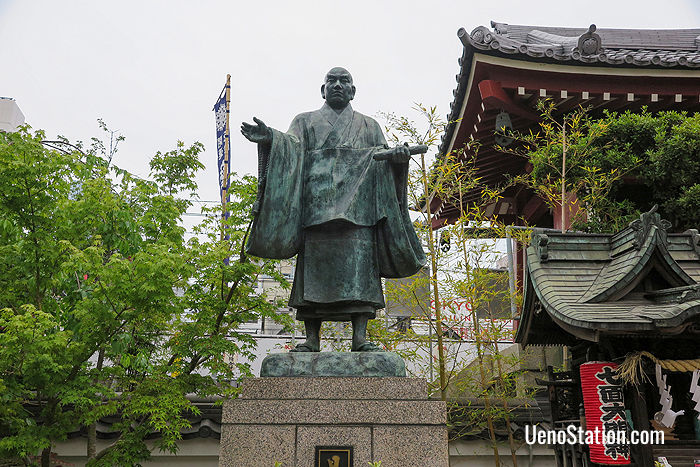 A statue of Nichiren

Nichiren (1222 –1282) taught devotion to the Lotus Sutra and was the founder of the Nichiren sect of Buddhism. 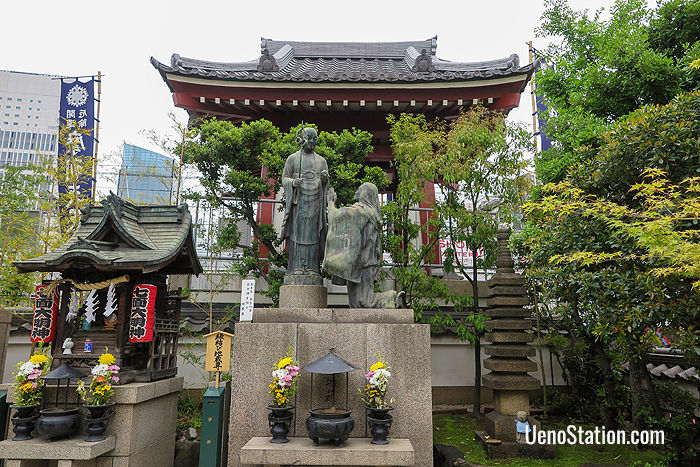 A statue of a devoted wife kneeling in front of Jizo

Jizo is the guardian deity of children and travelers. People pray to this particular Jizo statue for good friends, good work, and good connections.